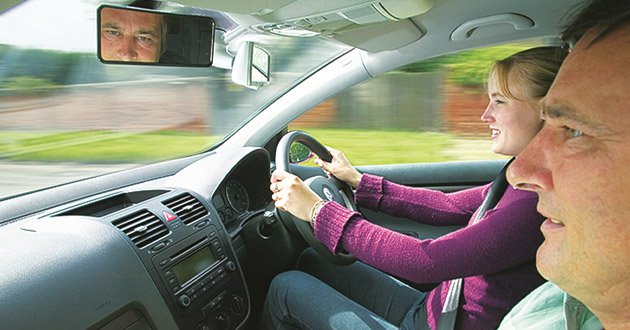 A driving examiner explains what they do when you take your practical driving test, and gives some advice on making the most of your test experience.

First, let’s put things into perspective. You do not owe the examiner anything. But, because you’ve paid good money to DVSA, the examiner owes you a good test. That’s what we get paid for. We’re just ordinary people doing the job that we’re trained to do.

We are ordinary people

All the normal things that normal people do.

During the test, we do not talk too much because we do not want to distract you from your driving. Try not to see the silence as awkward. Most people want us to talk to them a little bit. Some gentle small talk can ease people’s nerves and the contact can be reassuring. So, we do make conversation from time to time, but we try to time it so you’re not in the middle of a manoeuvre or having to concentrate particularly hard.

Also, we have to write things down so that we can keep track of how you’ve done in your test. When we put pen to paper, it does not necessarily mean that you’ve done anything wrong. And even if you have, it may not have been anything serious, so do not worry when we start scribbling.

Sometimes people are worried about making a fool of themselves in front of us. We do see some funny sights on test and many silly mistakes – it’s part of the job, but we’ll never make you feel self-conscious and will almost certainly have seen much worse. It’s not rare for candidates to try to take us the wrong way up dual carriageways or anti-clockwise around roundabouts!

We’ll always give you a fair test, based on the same standards every time, but …

Here are just a few of mine:

So do not be scared of us. We’re not monsters and we do not want to frighten you; we want you to do your very best and show us what safe and responsible drivers you are.

Make the most of your test experience, whether you pass or fail. There’s no shame in failing a driving test. I know many examiners who took numerous attempts themselves. It’s not a nice feeling when it happens, but there are almost always positives that you can take away from it. Listen to the examiner’s debrief at the end of the test (they’ll be using the notes they’ve been scribbling to do this) and if you take your instructor along with you, they’ll be able to help you understand where you can improve.

Remember, the test belongs to you, not to us. You’ve paid for it. But please be nice to us – we’re human too.