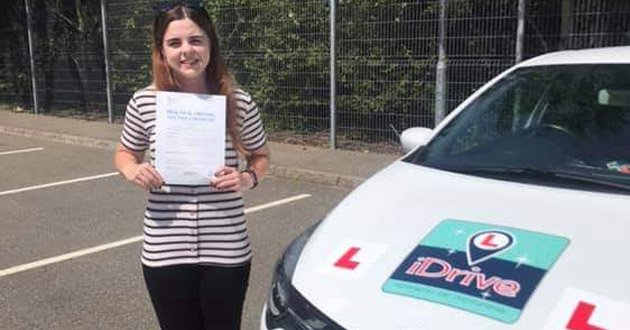 Let Charlotte guide you through her experiences of learning to drive. In part 3, she talks about lesson prep, what happened on the day of her practical test and buying a car!

This post is part 3 in a blog series. You can read part 1 here and read part 2 here.

After passing my theory test, my driving instructor, Angie, advised me to book my practical test (through GOV.UK). I decided to look into this straightaway, and I’m glad I did! There was a wait of just over 2 months and only one slot left, so I booked it in.

I also decided to step up my lessons to 4 hours a week, divided up into 2 lessons of 2 hours. This was not kind on my bank account, but I was finding that the week’s gap between lessons was not helping me to retain what I’d learnt. It usually takes around 45 hours of tuition and 22 hours of private driving practice before the average learner is ready to take the practical test. But, as I have no access to my own or any family members’ cars, taking more lessons seemed the best way to make up these hours and get as much experience as I could.

I was now doing 2 hours first thing on Saturdays, and another 2 hours after work on Wednesdays. The after-work lessons involved navigating rush hour traffic, which was a little tricky as not only were the roads busy with cars, there were also loads of cyclists around and many less-than-vigilant pedestrians rushing to get home. So, we’d drive out to quieter areas of the city for the lesson, which is where I learnt (and practised) the parking manoeuvres.

The 4 manoeuvres and dual carriageways

During my 10th lesson, we did the controlled stop (always remember to perform full observations around the car before you set off afterwards) and then started on the 4 parking manoeuvres. The first one was ‘pull over to the right and reverse’, which was not too bad. If there’s such a thing as a favourite driving test parking manoeuvre, this one’s mine. The next manoeuvre was the ‘parallel park’. This took me a while to get the hang of, though I found it helped me to improve my clutch control and once we had figured out my reference points, it was less of a struggle. You’ll get the odd impatient driver revving behind you, which can be a little off-putting, but do not rush yourself on their account!

During the next lesson, we headed for a quiet car park and I learnt the forwards bay park and the reverse bay park manoeuvres. Angie drew diagrams of the reference points and we practised lots of times while there was no one else about. I struggled with these manoeuvres, particularly the forwards bay park. We would practise in one car park until I could do it well, but when we’d try somewhere else I could not apply the techniques in the same way and I felt like I’d gone back to square one. I also struggled with correcting myself if I’d gone into the bay wonky, particularly knowing when to adjust the wheel and how to use my mirrors to judge and correct the movement of the car when reversing. To help build my confidence and experience with the parking manoeuvres, we practised at least one of them every lesson.

Next up were dual carriageways. Before I started driving, I had been quite worried about them, but once the time came, I did not find them too bad. It was a baptism of fire though, as I had to overtake a tractor and there were traffic jams along the way. I found exiting the carriageway tricky too, as the speed drop is quite sudden. Angie gave me a great tip for dual carriageway driving: make sure you can see the cars behind you in your rear-view mirror, not just your wing mirror, before you change lanes. Doing this means that you’re far enough away from them that they will not have to slam their brakes on for you. Over the next few lessons, we incorporated country roads into our routes, as there are lots around my area. On one drive around the countryside and dual carriageways, it rained very hard and I had to apply the theory I’d learnt to my practical driving – maintaining the 4-second gap and driving appropriately with the poor visibility and vehicle spray on the carriageway. Though the speed limits for single carriageways (like country roads) are 60mph, this is the limit and not the target! Slow and steady is best for country roads.

The practical driving test takes about 40 minutes to complete. Before you drive off, the examiner will ask you a ‘tell me’ question, where you explain how to undertake a vehicle safety task. They’ll also ask a ‘show me’ question as you’re driving, where you show them how you carry out a safety task. There’s a list of all the possible questions available on GOV.UK. You’ll also have to pull over at the side of the road and then rejoin the traffic again a few times, perform one of the parking manoeuvres and complete the ‘independent driving’ section. During this 20-minute section, you either have to follow road signs or follow a sat nav to a pre-programmed destination. Angie introduced some ‘independent driving’ practise into our lessons, and this really helped me to bring all of the skills I’d learnt in my lessons together. Navigating a journey on my own underlined the importance of lane discipline and was great preparation for driving without Angie’s guidance. I’d never thought about how distracting following a sat nav’s directions could be before. I’m definitely going to use one once I pass my test, so I found it really useful that it’s now included on the driving test syllabus (PDF on GOV.UK). These final few lessons before my test also focused on building my confidence around busier roads, residential streets and the parking manoeuvres.

I’d done 23 lessons by the time I took my practical driving test – so just under 50 hours of driving tutorials. As with my theory test, I spent every night after work going over the ‘show me, tell me’ questions and the parking manoeuvres. I made flashcards to test myself on the questions and spent ages making step-by-step tutorials (with diagrams!) of each parking manoeuvre. I tried to think positive thoughts about passing. My test was at 8:10am, with an hour’s lesson before, so I got everything ready for the morning and went to bed at 9pm.

Naturally, I was extremely nervous and felt butterflies in my stomach as I got ready in the morning and all through the drive to the test centre. When we got there, I sat in the waiting room, then my examiner collected me, and we went to the car. I took Angie with me for confidence and so she could feedback on my test afterwards. The examiner did not put me at ease and his stock questions to me (‘What would you usually be doing at this time?’) seemed forced. Nevertheless, I felt that the drive went well, I performed a good parallel park, knew I had got the two questions right and nothing too sudden happened along the way. Though I was unsure on a few actions I’d made, I did not think that these were major. Unfortunately, one of them was.

We got back to the test centre and the examiner told me that I had failed. I got three minors and one major. I was approaching some traffic lights and stopped at them when I saw my way to turn right was not clear – there were still oncoming cars. But I failed because I stopped over the advanced stop line at the lights. I’m not alone in making this mistake – the Driver and Vehicle Standards Agency lists it as the 5th most common reason for failing the driving test.

When he told me that I had failed and started giving me his feedback, I honestly could not breathe or focus. It was a weekend of many tears and, at the time, it felt like the end of the world. The thought of passing and having the freedom to escape the same 3-mile radius of home had been within my grasp, but one split-second mistake had ruined it. I had been searching for cars, dreamt of summer day trips and wanted to be able to drive to new work premises instead of taking buses there. I booked the earliest time I could find for another test (3 months away) and constantly checked the website for cancellations.

I got lucky and found a cancellation for 20 days after my first test. I’d had a couple of lessons since then and went into this test a bit more relaxed and aware of what to expect. I got a much nicer examiner; he was relaxed and friendly, which helped my nerves settle. On this test, I followed the sat nav again and drove on a dual carriageway. I got the reverse parking manoeuvre, which we did in the test centre car park at the end of the test. Once I’d secured the car, the instructor told me that I had passed, with 4 minors. I was so relieved that I’d done it and thanked him about 10 times. We took the classic ‘pass certificate by the car’ picture and then Angie drove us back home. My housemates answered the door in trepidation and had bought me pass celebration (or fail commiseration) flowers. I phoned my parents to tell them the good news and resumed my car search with renewed excitement.

I visited my parents for a few days the week after my test and the same day that my shiny new licence arrived in the post, I bought my first car. I’d done loads of research to slowly whittle the criteria down to a Toyota Yaris. We scoured a reputable classified car advert site for the perfect one, made a shortlist and headed to a Toyota dealership. The test drive was a bit stressful, the salesman sat next to me and this gave me driving test flashbacks. It was not the smoothest of drives on my part, but I liked the car and it had everything I’d been looking for, so I bought it. Driving around and getting used to another clutch was tricky, so my mum took me out around quiet roads to do hill starts and reversing manoeuvres.

I felt very nervous about driving on my own. I went out for short drives with my housemate and then booked a refresher lesson with Angie. If you're feeling wary of driving your own car for the first few times, there’s nothing wrong with asking for refresher lessons. I did this to help me practise the new drive to work and, although I had to pay for Angie’s time, it made me feel better about the journey and my driving abilities. My confidence has grown since then, and I’ve started driving to work now. I’m excited to finally have the freedom to visit new places and looking forward to becoming a better driver in the future.